The “Great Famine”, or “The Great Hunger”, refers to a period of mass starvation, disease, and emigration that swept over Ireland between the years 1845 and 1849. Outside of Ireland, however, it is usually referred to as “The Irish Potato Famine” because over half the population on that island at that time were completely reliant upon this cheap crop for food, due to a number of historical and political reaons. It is believed by many that about one million people died in this period, while over a million more people emigrated to other lands. As a result, during 1845 – 1849 the population of Ireland suffered a 20% – 25% reduction in its numbers. 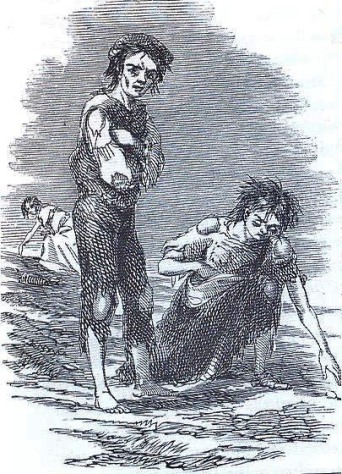 Undoubtedly the cause of the famine was potato blight, which was a fungus-like organism called ‘Phytophthora infestans’. This aggressive form of blight ravaged potato crops throughout Europe during the 1840s. In Ireland it first appeared in 1845 and in that year ruined up to one-half of the potato crop that year, followed by three-quarters of the crop over each the subsequent seven years. The blight’s disproportionate impact on the Irish population is due mainly to the fact that one-third of that population was dependant on the potato crop for a range of ethnic, religious, political, social, and economic reasons. These reasons included land acquisition, absentee landlords, and the Corn Laws, all of which contributed to this natural disaster in varying degrees. Sadly, all of these things remain the subject of intense historical debate.

To give us a better insight into conditions existing within Ireland at this time we should look at how Ireland progressed after the ratification of the ‘Acts of Union’ in 1801. The main result of this ratification was that, henceforth, Ireland was governed as a colony of Great Britain until Independence was finally gained in the early part of the Twentieth Century. From 1801 onward the combined nations were known to the rest of the world as the “United Kingdom of Great Britain and Ireland.” Under this new political reality the British government appointed Ireland’s executive heads of state, giving them the title of the ‘Lord Lieutenant’ and the ‘Chief Secretary of Ireland.’ The people of Ireland could, nonetheless, elect representation to the parliament in London, made up of 105 representatives to the lower house, or ‘House of Commons’. These were accompanied by 28 titled landowners, who took their seats in the upper house, or ‘House of Lords.

It must be remembered, however, that the bulk of these ‘elected’ representatives were landowners of British origin and/or their sons, which left the majority of the Irish population unrepresented. The vast majority of Ireland’s native population were practising Catholics, who were foridden from owning or leasing land, voting or holding elected office under what was known as “The Penal Laws.” These were a series of laws that were imposed to force Irish Roman Catholics and Protestant Dissenters (e.g. Presbyterians) to accept the Anglican Church, which was the reformed denomination defined by the English state and practised by members of the Irish state established Church of Ireland. These discriminatory laws were not finally repealed until the passing of the ‘United Kingdom of Great Britain and Ireland, Government of Ireland Act (1920).They had included –

Although the ‘Penal Laws’ were, for the most part, repealed by 1829,

their effects on Irish society and its governance was still being felt in 1845 and the onset of the ‘Potato Famine’. The vast majority of the land, at this time, was owned by English and Anglo-Irish families. The majority, Catholic, population were reduced to working this land as tenant farmers who were forced to pay rent to the landowners, while having no rights over their home or leased land.

The ‘Potato Famine’ was a watershed in Ireland’s history, because its effects would permanently change this island’s demographic, political, and cultural landscape.For the native Irish who stayed and those who left in the resulting diaspora, the famine became a rallying call for ‘Irish Nationalism’ and those movements seeking independence from the British Crown. Relations between many Irish people and the Crown were already strained by the onset of the famine, but these realtions were to be soured even further. Both ethnic and sectarian tensions were heightened, and helped boost the ideals of nationalism and republicanism in Ireland and among the Irish who emigrated to the United States and elsewhere.