It is said by many that a sweet-talking Irishman has a “Touch of the Blarney”, a gift of speaking given to him because he has kissed the ‘Blarney Stone’. The following verse I once heard, but I cannot recall the person who wrote it, and I offer it to the readers as a basic introduction to the story that follows it.

“Oh, did you ne’er hear of the

‘Tis found near the banks of

Believe it from me, no girl’s heart is

Once she hears the sweet sound of

“Ah! Dear God, Mick! You can talk and advise me until I’m blue in the face, but it still won’t matter for I just cannot do it. That, my friend, is just the long and the short of it.”

“Would you just listen to him, surely you are not one of these bashful types are you, Eddie?”

“Have you gone completely mad? You know that they’ll put into a museum along with other rare creatures like mermaids and Dodo-Birds! A bashful Irish man! Sure, nothing like it has ever been heard of, never mind been seen.”

“Aye, so they say. But, friend, I have caught the complaint anyway.”

“Well! May my arse trail the ground if ever I have heard the likes of this from a friend of mine!  It makes me worry about the future of our race, for if modesty gets a hold among us Irish it will be the ruin of us altogether. I shouldn’t surprise me that some of them damned English men have inoculated us with this affliction, as they travelled through our country. Now, Eddie, tell me what does it feel like when you are blushing?”

“Ah! Mick, now don’t you be laughing at me and making fun. Sure, there is none of us can help having a weakness. Anyway, it is only when I am with her that my heart seems to melt away entirely.”

“Never mind, my friend. Sure, it’s only a good man, like you, who can feel like that anyway. And so, pretty Nelly has put the spell on you and taken over your senses?”

“You could well say that, Mick, for its not one bit of sense do I have left. Sometimes I wonder if I ever possessed even an ounce of sense in my body. Do you know, Mick, no joking, but isn’t it a mighty odd thing that I can’t get my usually big mouth to utter a single word out of my head when I see her looking at me? Did you ever see Nelly’s eye, Mick?”

“I’ve seen them hundreds of times.”

“Maybe there isn’t a pair of them, now that I think on it?”

“As sure as there is an eye in a goat, I have never seen such wicked-looking innocence in the eyes of a Christian person before.  At least there is no one that I can remember.”

“Sure, man dear, it’s only right that you should think like that, Eddie.”

“Oh! Mick, the joy that beams out of those eyes, when she’s happy, is to me as good as that wonderful warm feeling you get from the softest sun-ray that ever made the world smile. But when she’s sad, oh, Christ, Christ, Mick! When those watery jewels flutter about her silken eye-lashes, or they flow slowly down upon her downy cheek, like dew upon a rose-leaf, who in the name of God could endure it? It’s as much as I can do to stand up before those merry glances, but when her eyes take to the water, then by all the powers of heaven, it bothers my heart out an’ out and I don’t know what to do.”

“And then there is her mouth! Did you ever see Nelly’s mouth, Mick?”

“I’ve only seen it from a distance, Eddie.”

“Well, that’s what I call a real mouth, Mick. It’s not like all those other mouths that are only to pile food and drink into. Her mouth is a soft-talking, sweet-loving mouth, with her kisses growing in tempting clusters about it, which none dare have the cheek to pluck off. Isn’t that right, Mick?”

“Now, be quiet for a while Eddie. Hold your tongue.”

“I will tell you, Mick, that if Nelly’s heart isn’t the very bed of love, why then Cupid is a total gobshite, that’s all. And then her teeth! Did you ever take notice of those teeth? I tell you that even the best pearls are simple paving-stones compared to Nelly’s teeth. Oh, how they do gleam and flash, as her beautiful round red lips part to let out a voice that is just so soft and sweet, almost like honey. Every word she speaks slips into the soul of a man, whether he likes it or not. Oh! Mike, Mike, there is absolutely no use in talking. If that woman isn’t an angel, she ought to be, and that’s all.”

“Jaysus, you really have fallen for this girl in a big way, Eddie, and that’s a fact. It’s a wonderful thing to see the talent that a boy can develop for talking such nonsense when his soft emotions get stirring in his head. Tell me, Eddie, have you ever spoken to her?”

“What? How could I? Sure, wasn’t I too busy listening to her? But, in all honesty, and between you and me, the truth of the matter is, I just couldn’t do it. Whether it was that she had bewitched me, or that my senses had got completely drowned with drinking in all her charms, making me stammer and stutter like a child, I don’t know! But every time that I attempted to say something to her, my tongue, may the devil take it, twisted and turned itself into knots, and sure devil the word would it say for itself, bad or good.”

“Well, now, allow me to think for a moment, and let me give you a wee bit of advice, Eddie. The next time you see that girl, just take it easy. Keep your feelings in check! Put a big stone on them and simply ask her about the weather. Your problem is, you see, that you want to pour out all you have to say at once, and your throat is too small and narrow to let it all through.”

“Be patient and cool, sure that’s good advice, Mick, if I can but follow it. This love is a great and troublesome affection, isn’t it?”

“It’s tremendous, Eddie. I had it once myself.”

“I didn’t catch it at all. I took to it naturally.”

“And did you ever get cured, Mick? Tell me.”

“I was completely cured.”

“How did that happen?”

From this conversation between two friends, Mick Riley and Eddie Flynn, it is quite clear that fabled Cupid’s arrow, “Feathered with pleasure and tipped with pain,” had firmly embedded itself in Eddie’s heart. Putting it plain and simple, Eddie Flynn was completely infatuated with Miss Nelly Malone. During a rest period at work they had indulged in this discussion and, when the conversation was ended, the two men resumed their mowing. Mick, the settled “married man” began to hum a sprightly air, which kept time to the stroke of his scythe. Meanwhile, the love-struck Eddie joined in, every now and then, with strictly orthodox sighs as an accompaniment.

It certainly was a most clear signal of just how strongly attracted Eddie was to pretty Nell. There was never a more noble heart that ever beat than the honest, manly heart that now throbbed with the first pangs of a passion that was both pure and unselfish. After an hour or two of labour, the two men rested again. Eddie was feeling rather sad and he remained silent. There is something within Irish men that makes them regard suffering as sacred and, having respect for this suffering in his friend, Mick also kept quiet. Finally, Eddie looked up. He was still a little downcast and there was a sheepish expression on his face, but there was the slight trace of a smile that crept across his lips as he said, “Mick, do you know what?”

“I’ve written a bit of a song about Nelly.”

“You didn’t,” smiled Mick, with an ambiguity in his voice that made it obvious that he believed his friend. “Is it a song?” he asked tactfully, “Sure why shouldn’t you? Haven’t you the great heart of a poet, and the ability to write songs that are as good as anyone else’s? Give us a wee blast of it, Eddie.”

“Damn the bit of it will I sing! Sure, you’ll only laugh at me, Mick.”

“Me? Not at all, Eddie!” replied Mick in such a manner that Eddie was convinced that his friend would not make fun of his efforts to sing. After pausing for a minute or two to prepare, Eddie cleared his throat nervously and, with a fine, clear voice, he began to sing: 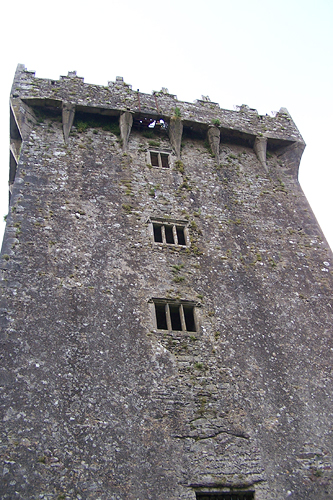 “All you sporting young heroes, with

hearts so light and free,

Take care how you come near

the town of Tralee;

For the witch of all witches that

ever wove a spell

In the town of Tralee, at this moment

“Oh, then, don’t venture near her, be

For the devil all out is the Rose of

“She’s as soft and as bright as a

from the fresh blossomed thorn,

Her cheek has the sea shell’s pale

bathed in the dew;

“So, then, don’t venture near her, be

For she’s mighty destructive, this

“Oh! her eyes of dark blue, they so

and each holds a star;

Were her tongue mute as silence,

But eyes and tongue both are too

much for one’s soul.

“Young men, stay at home, then,

and leave her to me,

For I’d die with delight for the Rose